The image above is a boxplot. A boxplot is a standardized way of displaying the distribution of data based on a five number summary (“minimum”, first quartile (Q1), median, third quartile (Q3), and “maximum”). It can tell you about your outliers and what their values are. It can also tell you if your data is symmetrical, how tightly your data is grouped, and if and how your data is skewed.
This tutorial will include:

As always, the code used to make the graphs is available on my github. With that, let’s get started!

For some distributions/datasets, you will find that you need more information than the measures of central tendency (median, mean, and mode) as the image below shows (image taken from here) 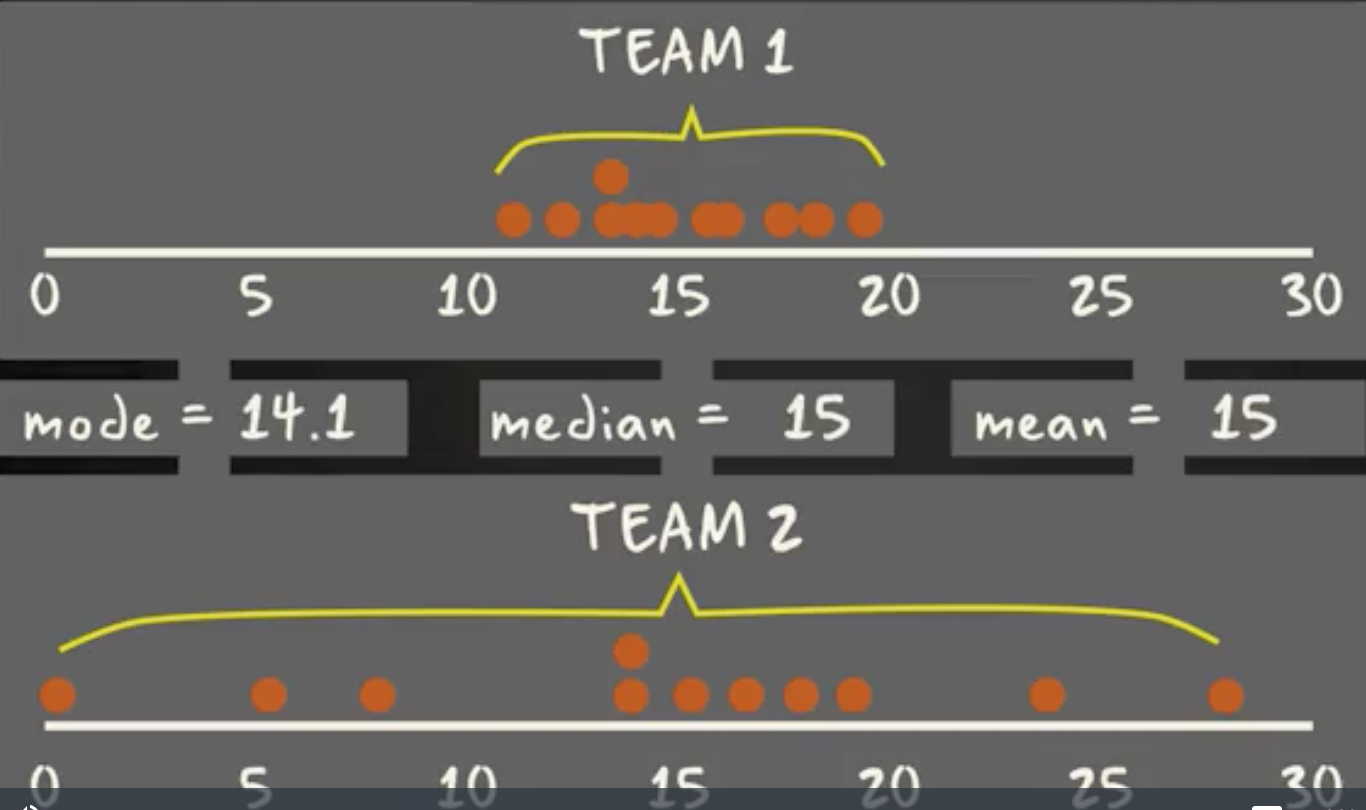 You need to have information on the variability or dispersion of the data. A boxplot is a graph that gives you a good indication of how the values in the data are spread out. Although boxplots may seem primitive in comparison to a histogram or density plot, they have the advantage of taking up less space, which is useful when comparing distributions between many groups or datasets.

Boxplots are a standardized way of displaying the distribution of data based on a five number summary (“minimum”, first quartile (Q1), median, third quartile (Q3), and “maximum”).

median (Q2/50th Percentile): the middle value of the dataset.

first quartile (Q1/25th Percentile): the middle number between the smallest number (not the “minimum”) and the median of the dataset.

third quartile (Q3/75th Percentile): the middle value between the median and the highest value (not the “maximum”) of the dataset.

What defines an outlier, “minimum”, or”maximum” may not be clear yet. The next section will try to clear that up for you. 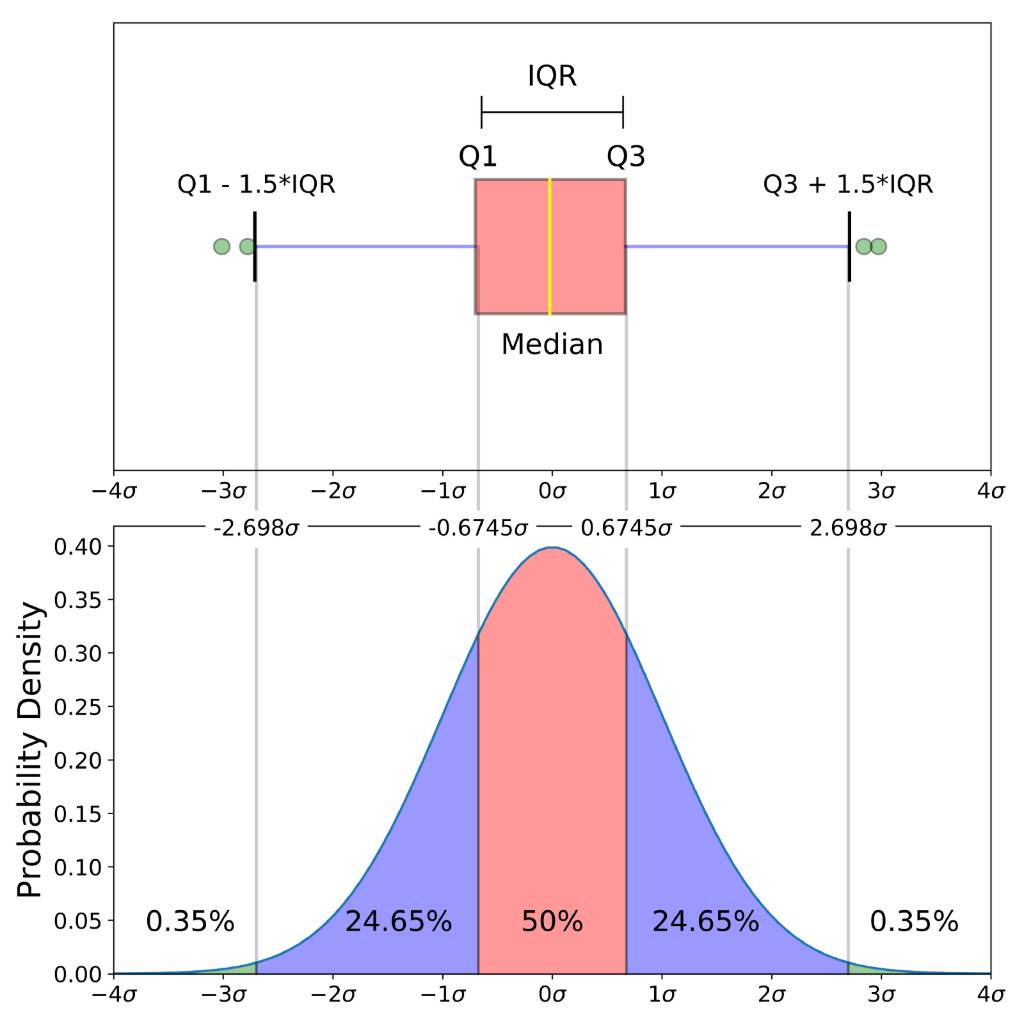 Let’s simplify it by assuming we have a mean (μ) of 0 and a standard deviation (σ) of 1.

This can be graphed using anything, but I choose to graph it using Python. 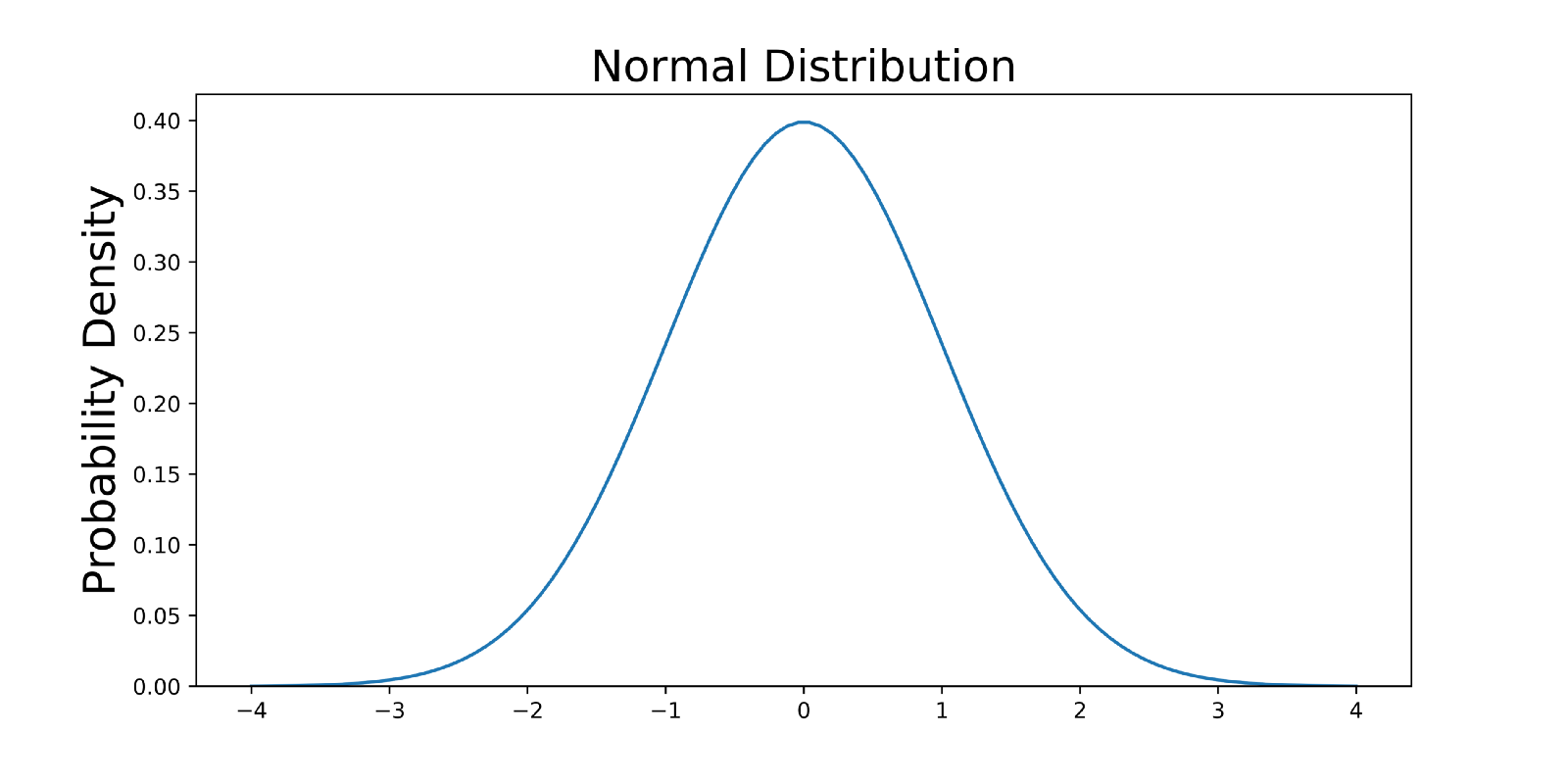 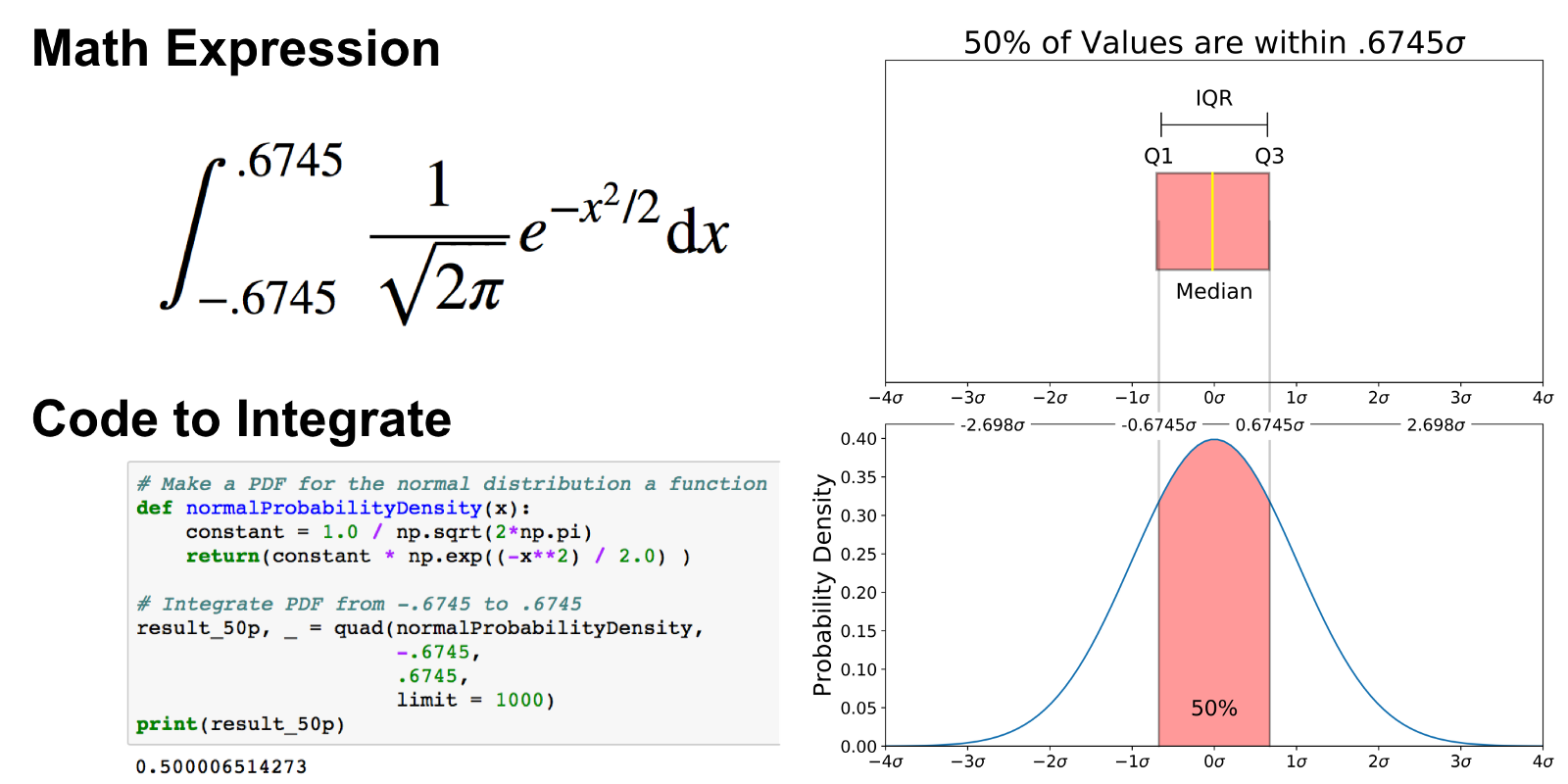 The same can be done for “minimum” and “maximum”. 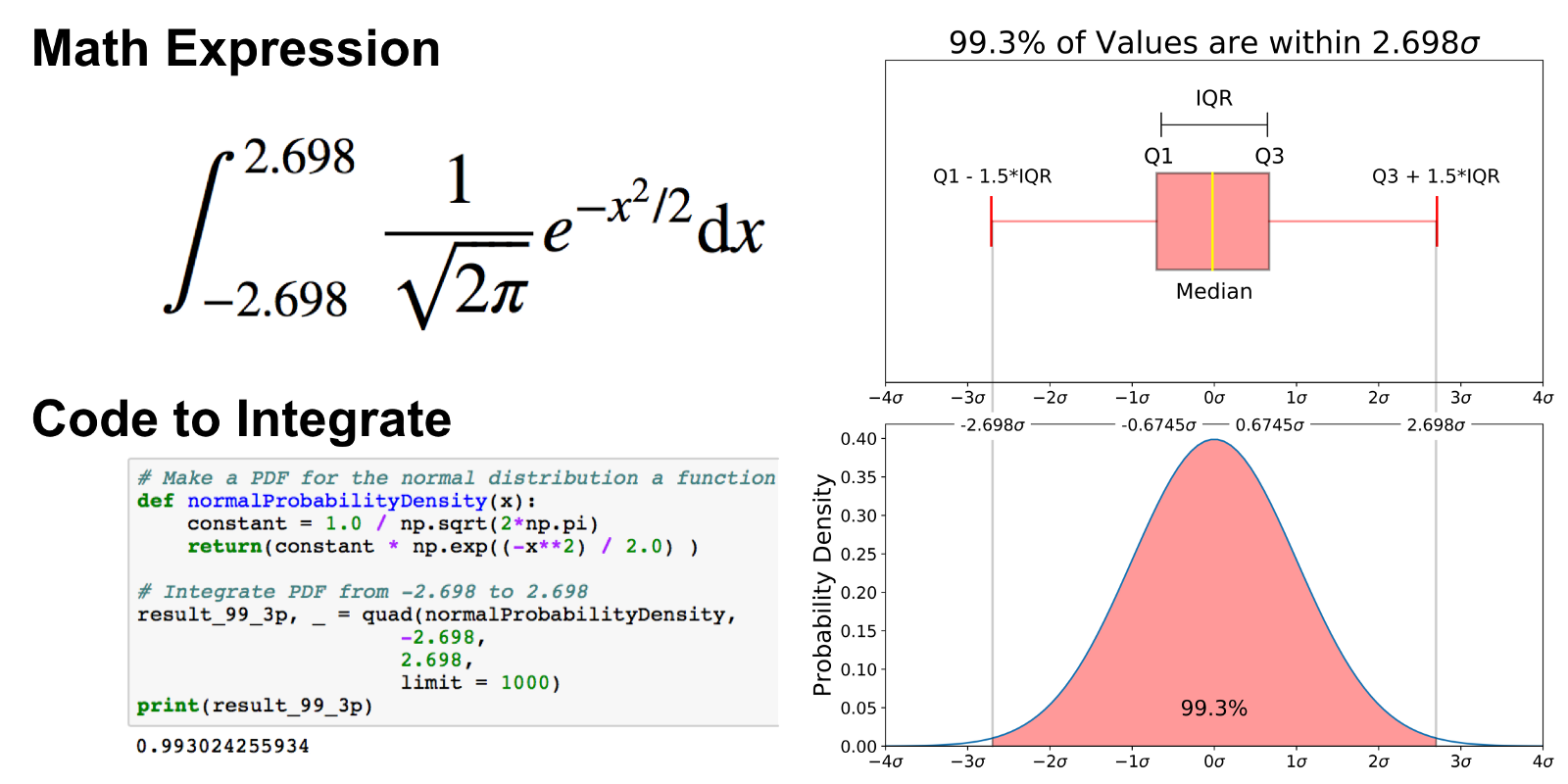 As mentioned earlier, outliers are the remaining .7% percent of the data.
It is important to note that for any PDF, the area under the curve must be 1 (the probability of drawing any number from the function’s range is always 1). 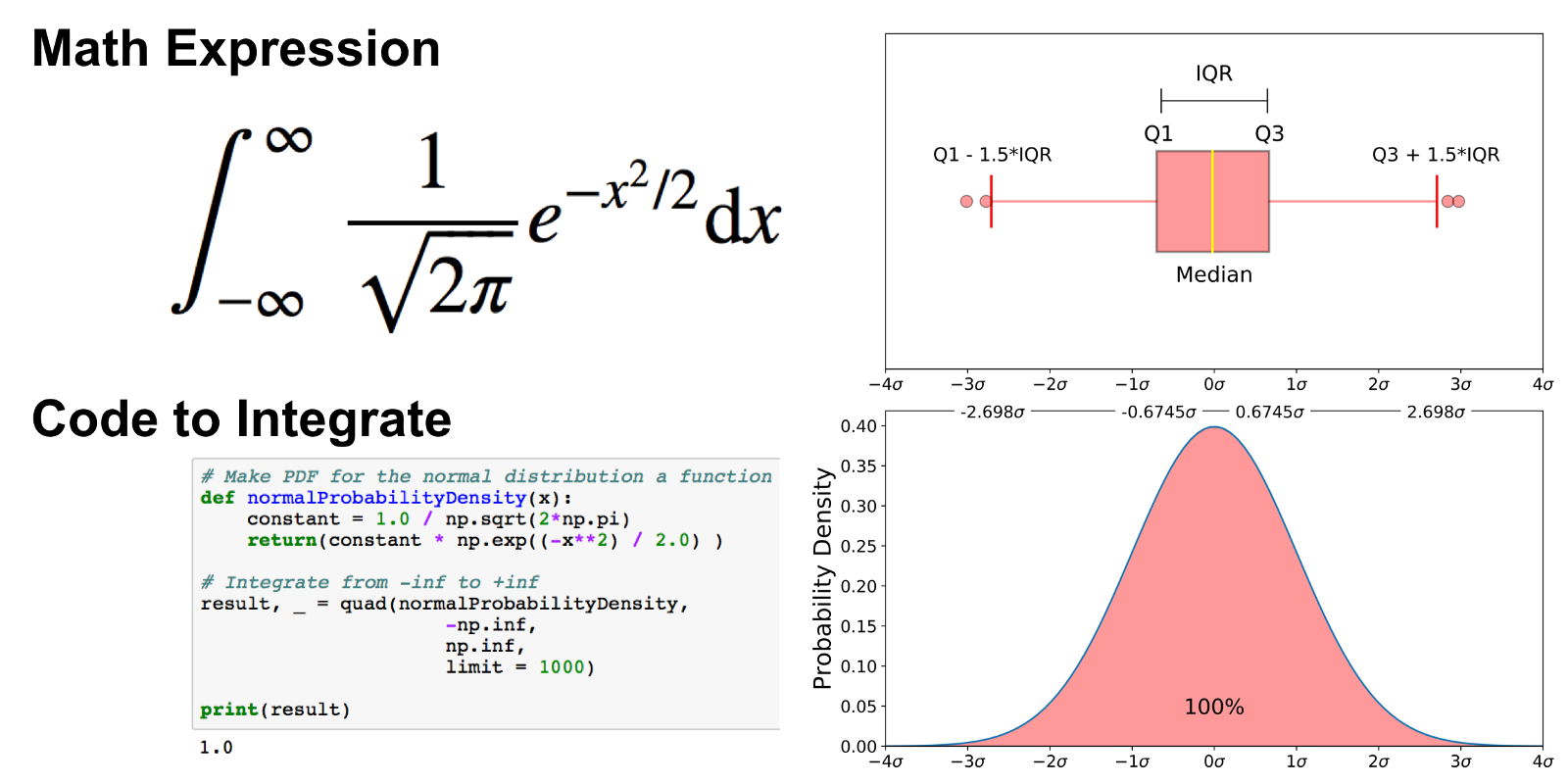 The video above is a free preview video from the Python for Data Visualization course.
In the last section, we went over a boxplot on a normal distribution, but as you obviously won’t always have an underlying normal distribution, let’s go over how to utilize a boxplot on a real dataset. To do this, we will utilize the Breast Cancer Wisconsin (Diagnostic) Dataset. If you don’t have a Kaggle account, you can download the dataset from my github.

Read in the data

The code below reads the data into a pandas dataframe.

The code below passes the pandas dataframe df into seaborn’s boxplot. 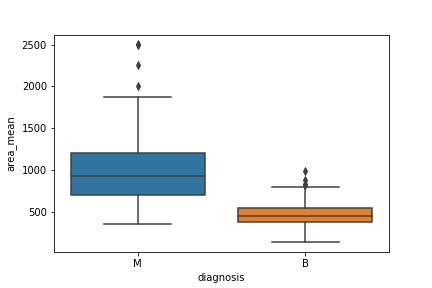 The boxplots you have seen in this post were made through matplotlib. This approach can be far more tedious, but can give you a greater level of control. 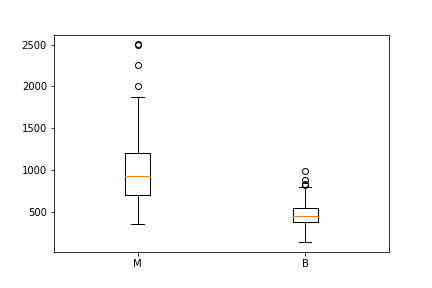 Keep in mind that you can make this a lot prettier with a little bit of work.

You can plot a boxplot by invoking .boxplot() on your DataFrame. The code below makes a boxplot of the area_mean column with respect to different diagnosis. 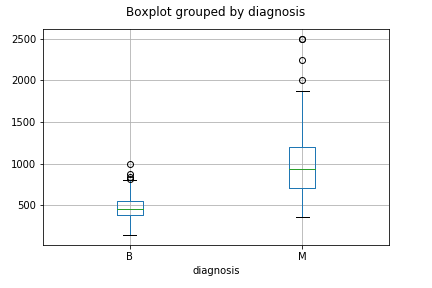 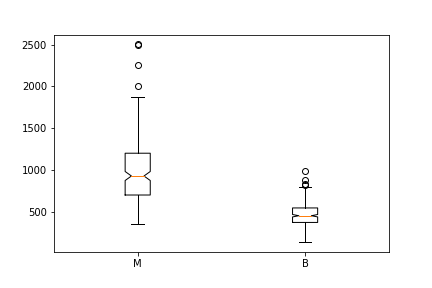 Data science is about communicating results so keep in mind you can always make your boxplots a bit prettier with a little bit of work (code here). 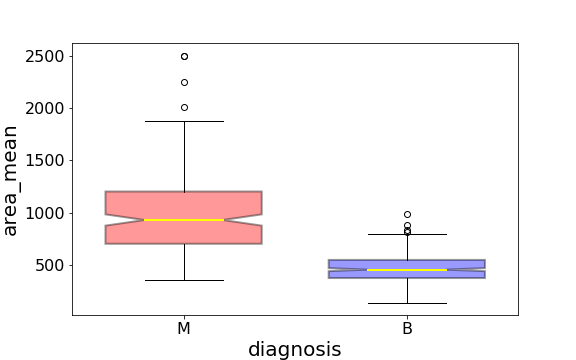 Using the graph, we can compare the range and distribution of the area_mean for malignant and benign diagnosis. We observe that there is a greater variability for malignant tumor area_mean as well as larger outliers.
Also, since the notches in the boxplots do not overlap, you can conclude that with 95% confidence, that the true medians do differ.
Here are a few other things to keep in mind about boxplots:

Hopefully this wasn’t too much information on boxplots. Future tutorials will take some this knowledge and go over how to apply it to understanding confidence intervals. My next tutorial goes over How to Use and Create a Z Table (standard normal table). If you any questions or thoughts on the tutorial, feel free to reach out in the comments below, through the YouTube video page, or through Twitter.

Data science: Which technologies are hot (and which are not)?

Reporter assaulted in Habiganj for reporting irregularity in relief distribution